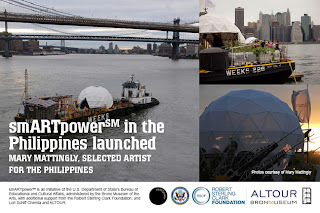 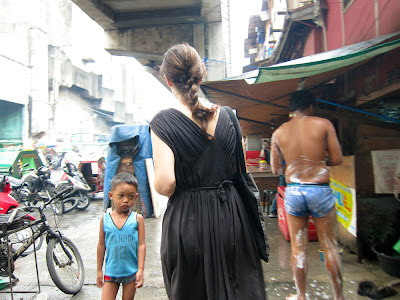 Mary Mattingly’s fellowship to Manila, Philippines from September 15 to October 31, 2012 progressed from: 1. its Research Phase 2. Community Education and Engagement 3. Artist talks  4. Workshops  5. Street Intervention 6.Cumulative exhibition 7. Site specific interventions/projects for her final week (end of October).
The “Wearable/Portable Architecture project” discussed the possibilities of having a locale create portable architecture based on the conditions of its environmental, urban and cultural conditions. It is structured to find ways in providing new arguments and sustaining an artistic impetus to our immediate environment. It addresses the timely issues of flooding and mobility, engaging participants to come up with designs that would respond to current environmental disasters and if portable architecture is applicable in our urban landscape. 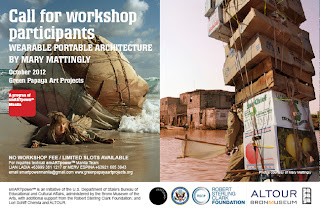 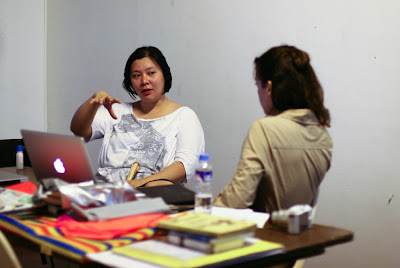 To make the project successful, the artist needed to have a strong sense of familiarity with what kind of City Manila is – its climate, the living conditions, the urban core and available resources.  The project required an interdisciplinary approach within the contemporary art community, local community, Manila's architecture demographic, university and high school students, as well as local non-government and government units. The diverse range of demographic were strategically tapped through a carefully planned programming scheme which developed from 1. Callouts 2. Networks 3. Interviews 4. Commitment of participants.  In the end,  20 participants were selected – (the maximum number of people that Green Papaya can accommodate) to have a comfortable yet rigorous workshop on Wearable/Portable Architecture in the gallery. 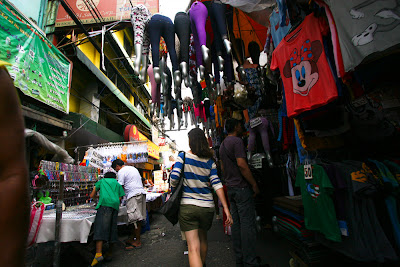 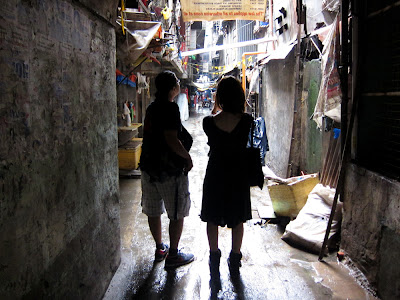 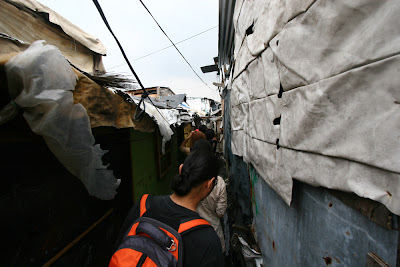 Green Papaya first and foremost begins within their own networks who are experts in their particular field.  The core team of smARTpower Manila is comprised of three independent curators who have been involved in contemporary exhibitions around Southeast Asia and beyond for the past years.  The artists’ research where done in public markets and local sources of raw materials in Manila, tenements around residential communities of the urban poor.  The artist talks and introduction to Mary Mattingly’s work and the project brief were held in two separate locations: One was at the Fine Arts Department of the University of the Philippines attended by students and academes, the other was an alternative art space in Manila attended by local artists, architects, designers and students from other schools. 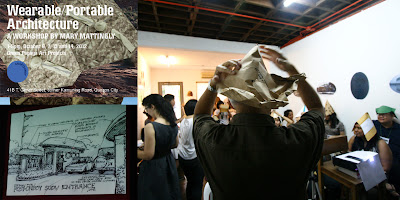 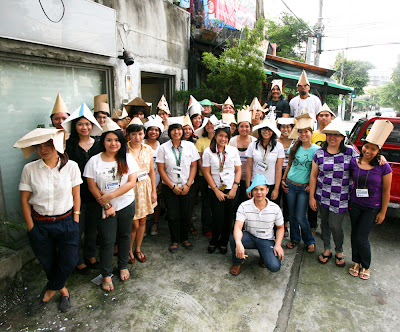 The workshops had in itself involve 20 selected participants to rigorously attend the four-part series.  These participants were selected through a call-for-participation announcement through social network sites and the gallery’s website.  20 out of 50 were selected in the manner of having equal representation from the high school sector, college, architecture, design, and artist participants.  Each of them were interviewed by Mary Mattingly in order to have an early exchange of ideas prior starting the workshop.  The first day of the workshop comprised of purely educational talks from key experts in three separate topics:  1. Climate Change (non-government)  2. Portable Architecture (professional architect) 3. Disaster Risk Management (government).  The workshop following the talks were focused on pattern making, designing, building. 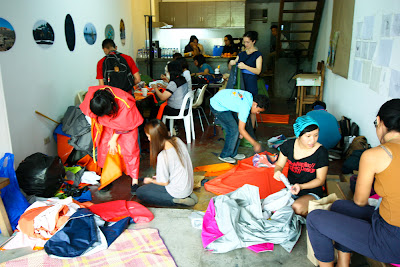 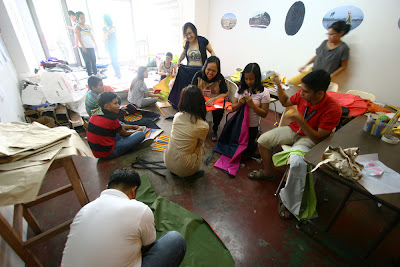 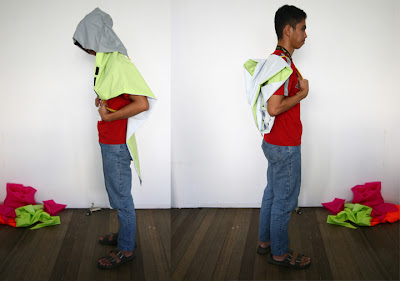 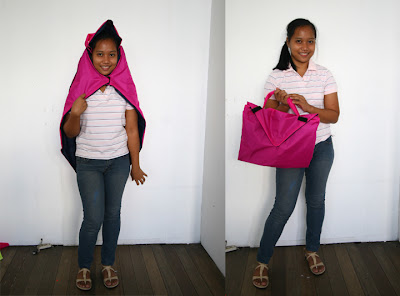 The last day was a street intervention connecting the 20 different components to form one sphere – travelling from the gallery to the local High School in the same location. The sphere was left in the High School for 24 hours to engage with the students, the next day a Q&A and public presentation with the artist and students of the local High School.   After the 4-part workshop series, the participants were encouraged to still visit the workshop space on a regular basis to work on their own designs at their own time until the climax of the project which is the Cumulative exhibition of the participants works. 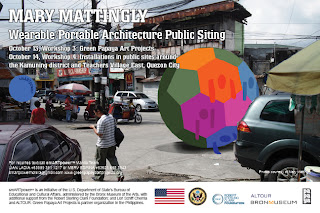 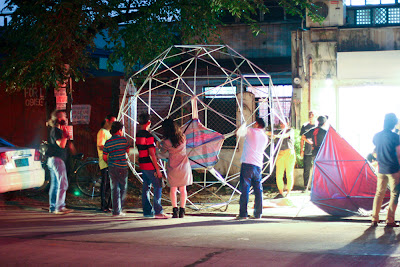 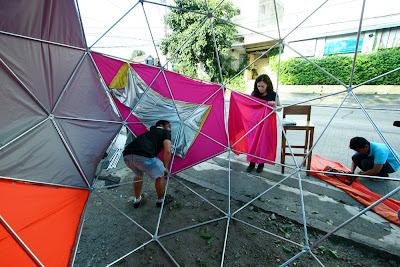 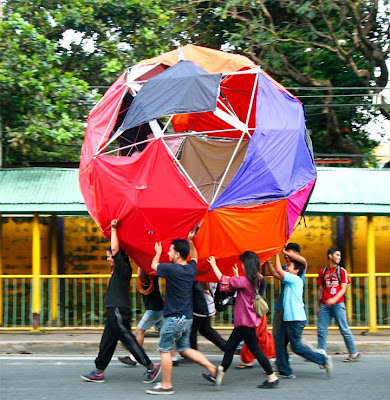 The exhibition at green papaya was held on Wednesday October 25, 2012 where the individual designs of the works of the participants were shown, photos of the process of Mary Mattingly’s project were mounted, as well as film clips as documentation of the project.  The sphere was also put inside the gallery where children and adults playfully climbed and engaged with during the duration of the exhibition. 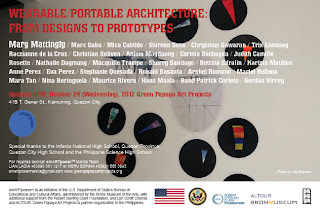 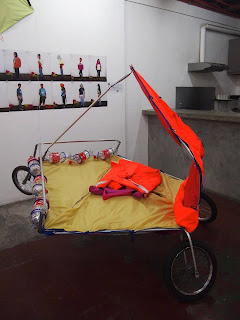 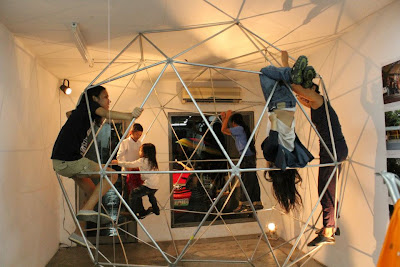 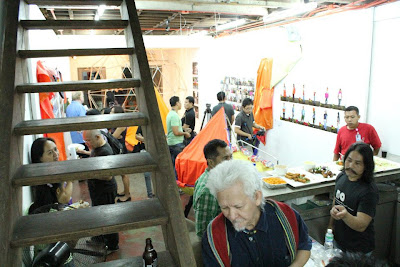 smARTpower is an initiative of the U.S. Department of State's cultural diplomacy program. Administred by the Bronx Museum of Arts, New York. smArtpower is sending 15 American artists abroad to work with local artists and young people around the world to create community-based art projects. Selected artists will design and develop programs in cooperation with local arts organizations in host countries including China, Ecuador, Egypt, Ghana, India, Kosovo, Nepal, Nigeria, Pakistan, The Philippines, Sri Lanka, Turkey and Venezuela.  Green Papaya Art Projects has been been appointed local partner organization in the Philippines.

Green Papaya Art Projects in itself is the longest running non-profit independent art space in Manila. For the project, Green Papaya put together a smARTpower Manila team to run the program. Green Papaya has been a contemporary art platform for cross-practices in contemporary art with unrestricted framework.  For the past 10 years, Green Papaya is known to uphold artists’ positions and interests by providing the most conducive and challenging conditions for both production and presentation of their works. It's programming attempts to be a crucial link between the platform and the community, between the mainstream art practice and the independent surge of experimentations, and between the traditional institutions and artist-run initiatives. 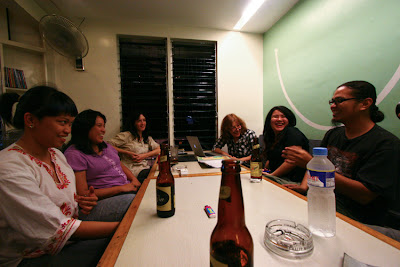 This could be a very interesting project. At first, some might think that a portable architecture is weird. But in reality, this is a part of the evolution process. Since our communities are starting to be congested, it is also good to find more ways on how can we come up with solutions.

you can look at my works at hugeart.blogspot.com I am willing to work with you if you have projects here in Mindanao